“Greg” I hear you cry,  “we know eggs are a great source of protein blah blah blah”

One whole egg contains an amazing range of nutrients.

A large egg contains 77 calories, with 6 grams of quality protein, 5 grams of fat and trace amounts of carbohydrates. 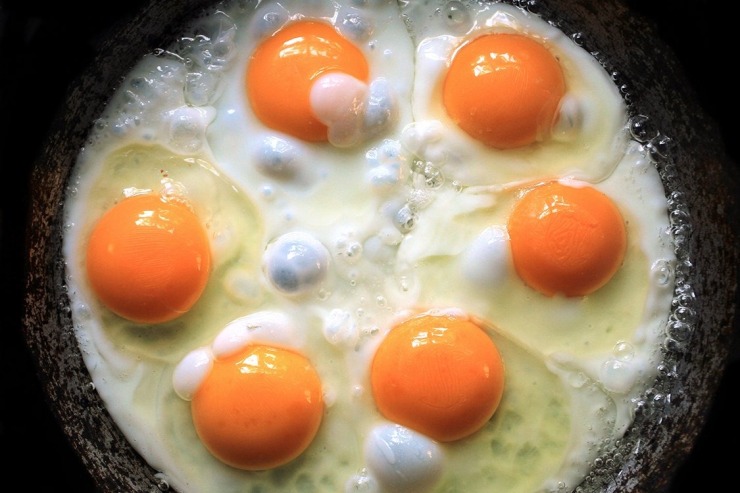 Eggs Improve Your Cholesterol Profile and do NOT Raise Your Risk of Cardiovascular Disease.

The main reason people have been warned about eggs is that they’re loaded with cholesterol.

One large egg contains 212 mg of cholesterol, which is a LOT compared to most other foods.

Whole eggs are incredibly nutritious, containing a very large amount of nutrients compared to the calorie load. The nutrients are found in the yolks, while the whites are mostly protein.

However, just because a food contains cholesterol doesn’t mean that it will raise the bad cholesterol in the blood. 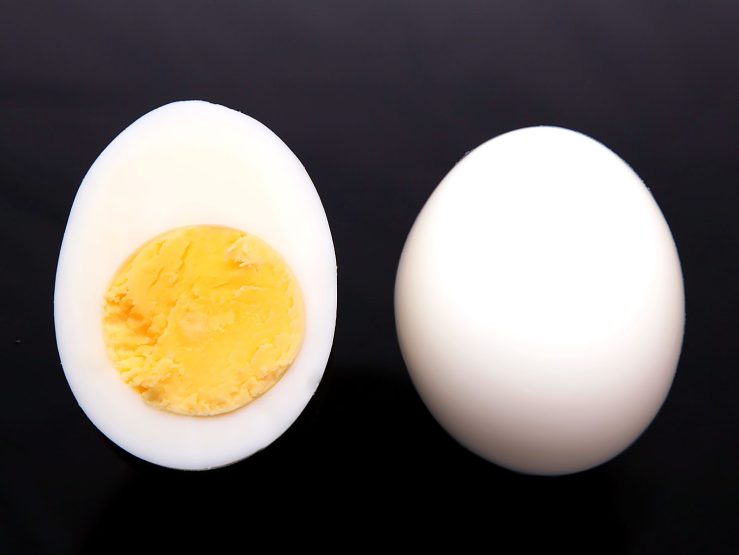 The thing is, many studies show that eggs actually improve your cholesterol profile.

Eggs tend to raise HDL (the “good”) cholesterol and they tend to change the LDL (the “bad”) cholesterol to a large subtype which is not associated with an increased risk of heart disease.

One study discovered that 3 whole eggs per day reduced insulin resistance, raised HDL and increased the size of LDL particles in men and women with metabolic syndrome.

Multiple studies have examined the effects of egg consumption on the risk of cardiovascular disease and found no association between the two.

However, some studies do show an increased risk of cardiovascular disease in diabetic patients. This needs further research though and probably doesn’t apply on a low carb or Keto diet, which can in many cases reverse type II diabetes. 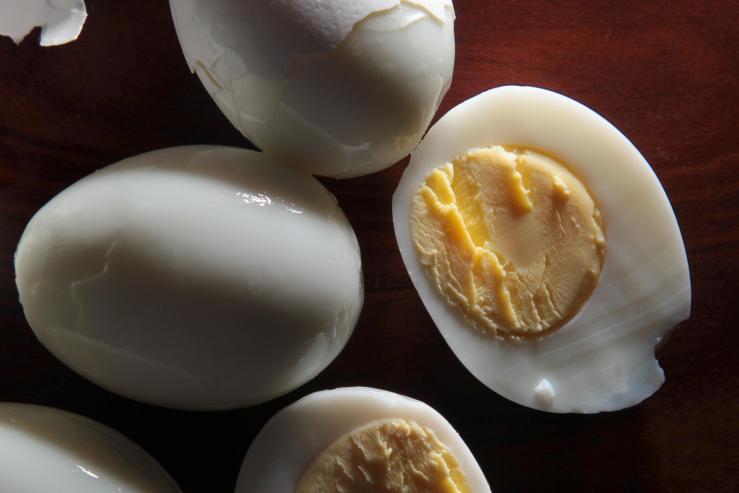 Studies show that eggs actually improve the cholesterol profile. They raise HDL (the good) cholesterol and increase the size of LDL particles, which should lower the risk of heart disease.

Choline is a lesser-known nutrient that is often grouped with the B-complex vitamins.

Choline is an essential nutrient for human health and is needed for various processes in the body.

It is required to synthesize the neurotransmitter acetylcholine and is also a component of cell membranes.

A low choline intake has been implicated in liver diseases, cardiovascular disease and neurological disorders.

This nutrient may be especially important for pregnant women. Studies show that a low choline intake can raise the risk of neural tube defects and lead to decreased cognitive function in the offspring.

The best sources of choline in the diet are egg yolks and beef liver. One large egg contains 113 mg of Choline. 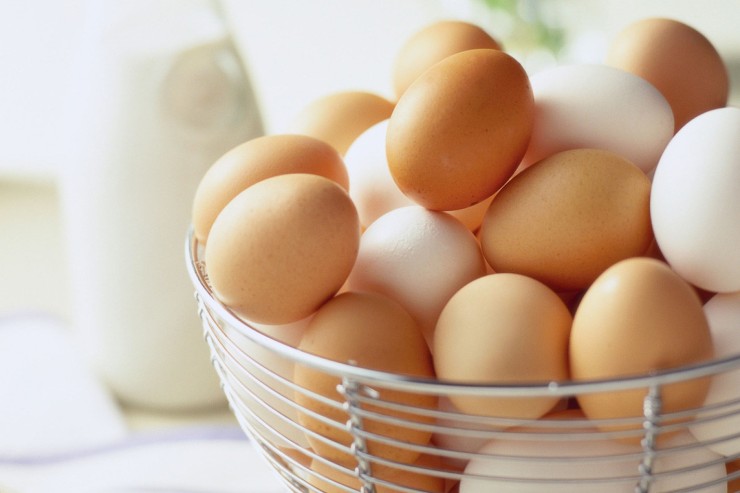 Choline is an essential nutrient that 90% of people in the U.S. aren’t getting enough of. Egg yolks are an excellent source of choline.

Choline is one of the newest nutrients to be added to the list of human vitamins. It was only added to the list of required nutrients by the National Academy of Sciences (NAS) in 1998. While the NAS does not officially recognize choline as a vitamin specifically belonging to the B-complex family of vitamins, it is officially recognized as a required nutrient that you need in your everyday meal plan.

It was once believed that we made enough choline in our bodies from other nutrients to meet our need for this important substance. More recent research using choline-depleted diets has demonstrated that we really do require some outside help from our food to keep our bodies running well.

Eggs Contain High-Quality Proteins With a Perfect Amino Acid Profile
Proteins are the main building blocks of the body and serve both structural and functional purposes.

They consist of amino acids that are linked together, kind of like beads on a string, then folded into complex shapes.

There are about 21 amino acids that the body uses to build its proteins. 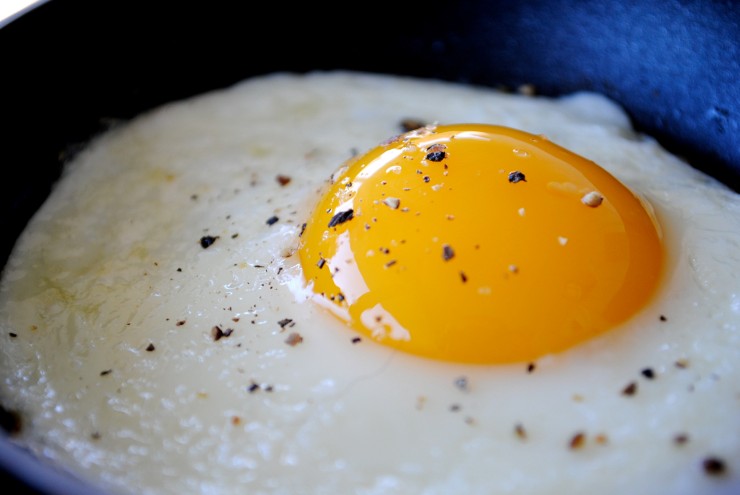 The body can not produce 9 of these amino acids, which are deemed as “essential” and must be gotten from the diet.

The quality of a protein source is determined by its relative amounts of these essential amino acids. A protein source that contains all of them in the right ratios is a good source of protein.

Eggs are among the best sources of protein in the diet. In fact, the biological value (a measure of protein quality) is often evaluated by comparing it to eggs, which are given the perfect score of 100.

Eggs are an excellent source of protein, with all the essential amino acids in the right ratios.

Eggs Are Loaded With Lutein and Zeaxanthin, Which Protect the Eyes
There are two antioxidants in eggs that can have powerful protective effects on the eyes.

They are called Lutein and Zeaxanthin, both found in the yolk.

Lutein and Zeaxanthin tend to accumulate in the retina, the sensory part of the eye.

These antioxidants significantly reduce the risk of Macular Degeneration and Cataracts, which are among the leading causes of vision impairment and blindness in the elderly.

Eggs are very high in the antioxidants Lutein and Zeaxanthin, which can drastically reduce the risk of Macular Degeneration and Cataracts.

Eggs for Breakfast Can Help You Lose Body Fat
Eggs contain only trace amounts of carbohydrates, but plenty of protein and fat.

Now More on Choline if you weren’t already convinced!

So I’ve bored the pants off you now about Eggs and Choline, but you really need to see the benefits in greater detail below.

Forms DNA and Cell Structures
Choline helps the body to absorb fat, and fats are then used to create cell membranes and structures. Without enough choline in the body, our cells cannot properly withhold their structure and signal messages to other parts of the body.

Choline is needed to create DNA that is responsible for building out entire body structure. Choline and folate are known to be key nutrients involved in the methyl group processes, which the body uses to form the genetic material that helps build every system within the body.

Supports Central Nervous System
One of the main benefits of choline is that it is used by the body in a variety of ways that are crucial for nerve functioning, including aiding in nerve signalling and maintaining the membranes of brain cells.

Choline acts as a precursor to certain important neurotransmitters, including acetylcholine, which is used in healthy nerve and muscle function. Neurotransmitters are chemical symptoms of communication used throughout the body constantly to relay information from system to system.

The neurotransmitter acetylcholine specifically plays a part in memory and learning, so a choline deficiency can result in poor concentration, poor memory, mood changes and other cognitive impairments, especially as someone ages. Acetylcholine is formed when an acetate molecule combines with a choline molecule, so without enough choline present in the body, this molecule cannot be properly produced and brain function can suffer.

In people who have low levels of choline present within their body, some studies have found that they are more at risk of experiencing liver damage and even liver failure. Choline also helps form LDL cholesterol within the liver, and even though LDL is considered the “bad” kind of cholesterol, a certain level is still needed for healthy functioning (without enough, the body will suffer by storing fat in the liver).

Helps Protect Memory and Loss of Brain Function
Another one of the benefits of choline is its ability to keep your mind mentally sharp as you age. Because it’s a component of cell membranes and neurotransmitters that are used in nerve signalling, choline also plays a role in preserving memory and preventing dementia, memory loss and other signs of cognitive decline as someone becomes older.

As we age, our brain becomes less elastic. Choline does an important job of maintaining brain elasticity by working to maintain levels of acetylcholine, which naturally declines into old age.

Can Help with Exercise Performance and Muscle Function
Choline helps to improve mental energy, focus and concentration, which are all important for physical activity and athletic performance. It’s believed that choline’s effect on your metabolism and neurotransmitters in the brain can produce quicker reaction times and cut down on the amount of time needed for mental processing.

Choline may also be helpful in improving energy levels, your mood, sleep cycles and recovery time following strenuous activity. Additionally, choline is used in muscle nerve functioning and may be useful in preventing fatigue and muscle aches or pains following exercise. Every time a muscle moves within the body, choline is needed to activate the neurotransmitter acetylcholine, which sends chemical signals to muscles and makes them mobile.

May Help Maintain Heart Health
Choline and folate assist in the conversion of homocysteine, which prevents the body from accumulating too much fat and may be beneficial in cutting down on the risk of having a heart attack or stroke.  Homocysteine is an amino acid that enters the body from protein sources, normally meat, and high levels of homocysteine have been correlated with the development of heart and blood vessel diseases.

Some studies have shown that choline and lecithin can help to reduce blood cholesterol and risk for heart disease, but different studies have yielded inconsistent results, so more research is still needed before doctors will begin to prescribe choline for its ability to lower LDL (“bad”) cholesterol and triglycerides.

Supports a Healthy Pregnancy
Pregnant women need even more choline than anyone else because choline is rapidly used by fetuses while their brains, cell structures and nerve channels are forming. Some studies even show that when a fetus obtains more choline, they have a better chance of later having healthy, sharp brain functioning and a lower risk of brain abnormalities. Other studies show that pregnant women with a low blood level of choline have been shown to be at a higher risk for having children with neural tube defects and developmental problems.

Choline is also naturally found in breast milk since it’s important for a newborn’s growth and proper development. This is the reason it’s added to most infant formulas. Neuron synapses are being formed in the brain of fetuses and infants at a very rapid rate, so choline plays a major part in helping to build the foundation of the brain’s structure.

Choline is also important during pregnancy because of its relationship with folate. Choline, folate and B vitamins all work together to keep levels of one another in check. Choline is one of the methyl donors in the body, which means that when folate, a vital nutrient needed for fetal development, is low, that choline is able to help fill in and carry out body functions where folate is needed but is missing.

Important for Children’s Growth and Development
Neuron plasticity refers to the brain’s ability to build new neuron connections, and choline is thought to be very important for supporting brain elasticity and plasticity.

As children grow older, choline is needed to help develop brain function since it plays a role in learning, remembering, logical thinking and concentration abilities. Children need to acquire choline to form neurotransmitters channels in their brain that will help with information retention, verbal abilities, creative thinking, mathematical skills, social cues, and more.

In fact, choline is needed for forming new brain connections between neurons called synapses, which is the chemical reaction needed for memories to actually form in the brain. Some reports even show that choline can help prevent learning disabilities, including ADHD, and can improve concentration in children and teens.

Important to note NOT ALL EGGS IS EGGS!!!

Hens are often raised in factories, caged and fed grain-based feed that alters the final nutrient composition of the eggs. It is best to buy Omega-3 enriched or pastured eggs, they are more nutritious and healthier. 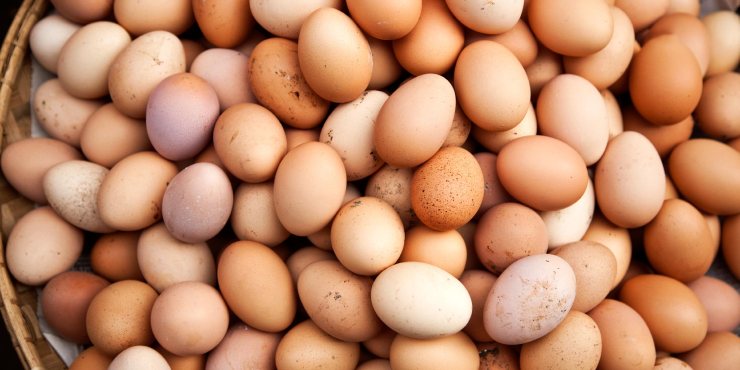 Wowzer! If you made it here thank you for taking the time to read my little blog.

Thanks to Healthine Dr Axe and Google as always you guys make life better every day!